Gordon Belt and Traci Nichols-Belt are a husband and wife team of authors and public historians. Together, they have collaborated on two books. Traci Nichols-Belt is the author of Onward Southern Soldiers: Religion and the Army of Tennessee in the Civil War. Her book explores the significant impact of religion on the Army of Tennessee, C.S.A., on every rank, from generals to chaplains to common soldiers. Gordon Belt is the author of John Sevier: Tennessee’s First Hero which focuses on the life and legend of Tennessee’s first governor, John Sevier. Both books are published by The History Press, an award-winning publisher of local and regional history titles from coast to coast. Gordon and Traci’s writings focus specifically on stories from their home state of Tennessee. 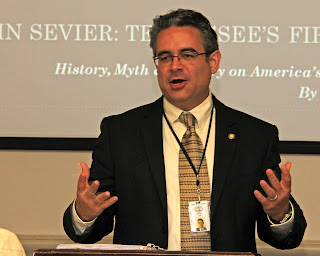 Gordon T. Belt is a public historian and author of John Sevier: Tennessee's First Hero, published by The History Press.

Gordon has had a lifelong passion for history, and has worked in special collections libraries and archives in the "Volunteer State" since 1995. He is currently the Director of Public Services for the Tennessee State Library & Archives. Previously, Gordon worked as the Library Manager for the First Amendment Center, a non-partisan think tank based in Nashville, Tennessee and Washington, D.C.

Gordon earned his master’s degree in History with a concentration in archival administration from Middle Tennessee State University. He received his bachelor’s degree in Political Science from the University of Tennessee at Chattanooga. Gordon is a past president of the Society of Tennessee Archivists, and holds memberships in the Society of American Archivists, National Council on Public History, and the Tennessee Historical Society. 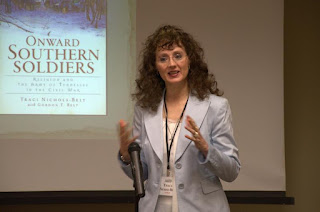 Traci Nichols-Belt is the author of Onward Southern Soldiers: Religion and the Army of Tennessee in the Civil War, published by The History Press. Traci is an ordained and licensed minister and holds a master's degree in history from Middle Tennessee State University and a bachelor's degree in political science from Anderson University.

During her academic career at MTSU, Traci worked for the Tennessee State Museum and wrote two National Register nominations for the Johnsonville Historic District in New Johnsonville, Tennessee, and the Historical AME Church and Cemeteries in Alexandria, Tennessee. Traci has also worked as a historical consultant and grant writer for the Clement Railroad Hotel and Museum in Dickson, Tennessee.

Traci has been interviewed on radio and appeared on television to speak about the role of religion in the Civil War. In June 2012, Traci was among several religion and history scholars interviewed for the Nashville Public Television documentary, "Crisis of Faith," part of NPT's "Tennessee Civil War 150" series, a multi-part project coinciding with the Sesquicentennial anniversary of the Civil War. In April 2012, Traci and Gordon appeared together on NPT's "A Word on Words with John Seigenthaler" to discuss their book, Onward Southern Soldiers. In July 2012, Traci and Gordon co-authored an article also titled "Onward Southern Soldiers" for The New York Times Civil War blog, "Disunion."