Onward Southern Soldiers: A prelude of things to come...

Today - April 12th - marks the 150th anniversary of the start of the Civil War, and over the course of the next four years you will probably read countless stories about how this major event in United States history will be remembered. One such story that has yet to be told is the role that religion played within the Army of Tennessee, C.S.A. Though scholars have written broadly about how religion influenced the actions and outcomes of the Civil War, no one has taken the opportunity to delve deeply into the religious spirit of the Confederate Army of Tennessee -- until now.


While working towards her Master's degree in History at Middle Tennessee State University, my wife, Traci Nichols-Belt, wrote her thesis on this very subject. Work on "Onward Southern Soldiers: A Study of the Connection Between Religion and the Common Soldier in the Army of Tennessee, C.S.A." began when Traci entered graduate school in the fall of 1999. That fall she chose the broad subject of religion and the Civil War as the subject for her thesis. She continued her research and the further definition of the scope of this subject throughout her graduate studies, completing her thesis in the spring of 2003.

Using primary sources -- through diaries, letters, journals, memoirs, and sermons -- "Onward Southern Soldiers" examines the personal writings and experiences of Confederate military and religious leaders, chaplains, and common soldiers, to discover how the message of religion delivered by the Confederate hierarchy played out in their personal lives. Traci's intentions from the onset of her research were always to publish this work in a somewhat expanded form. A chapter from this thesis, "Chaplains in the Army of Tennessee, C.S.A.: Warring Disciples Carrying the Gospel," was published in the Winter 2004 issue of the Tennessee Historical Quarterly, but personal family obligations made it necessary for Traci to set this work aside for a number of years. This year, however, the Civil War Sesquicentennial has provided an exciting motivation and timing to complete the work which Traci began so long ago.

Over the next several weeks, I'll be working with Traci to publish her thesis as a book, making it available to a wider audience. Details are in the works, but I'm planning to share more information on this blog about this book in a build-up to the publication date. Blog posts may be less frequent than readers are accustomed to seeing, but in the end I think my time spent editing Traci's book will be well worth it. I'm thrilled to be working with my wife on this project, and I hope you'll stay tuned to The Posterity Project for future updates! 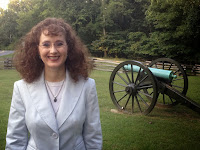 Traci Nichols-Belt is the author of Onward Southern Soldiers: Religion and the Army of Tennessee in the Civil War, published by The History Press. Traci holds a Master's degree in public history from Middle Tennessee State University and a Bachelor's degree in Political Science from Anderson University. Her principal research interest is the Civil War, with a particular focus on the impact of religion on the military. Traci has appeared on radio and television to speak about the role of religion in the Civil War, and she has had her writings published in the Tennessee Historical Quarterly and in The New York Times Civil War blog, Disunion.