To this day, John Sevier's relationship with the Native American tribes of the Overmountain region remains a remarkably complex topic clouded in hagiography and embellishment. As a well-known Indian fighter with "35 Battles and 35 Victories" to his credit, Sevier led a tenacious assault upon the Cherokees, rapidly moving from village to village destroying everything in sight. Sevier usually employed a small but well-trained army of frontiersmen to penetrate the contested Native American territory, destroying villages and supplies, and capturing or killing adversaries. At times these skirmishes devolved into bloody confrontations of hand-to-hand combat between white settlers who sought to defend their newly acquired land, and Native Americans who saw the white man's ever increasing encroachment on their territory as a threat.

Sevier's relationship with these noble warriors, however, could never be characterized simply as a fight between adversaries. Sevier had a deeply complicated military and diplomatic relationship with the Cherokees and other Native American tribes of the region--a relationship that has eluded scholarly examination in most of the narratives of John Sevier's life.

By most historical accounts--albeit from the white man's perspective--the Cherokees both feared and respected Sevier for his leadership, diplomacy and fighting prowess. As a diplomat on the frontier, Sevier engaged in many negotiations with the Cherokees in order to avoid bloodshed. In one particular letter written on July 28, 1781, Sevier wrote to the "Warriors and Chiefs, Friends and Brothers" of the Cherokee Nation and proclaimed:

"I never hated you as a People, nor warred with you on that account. I fought with you, but it was for our own safety & not from any delight I had in hurting you. I am not afraid to fight with men, but I never hurt women & children, they are innocent human beings. It is true I took some of them prisoner, but it was only with a view to exchange for our People you have as prisoner. I have fed them well, kept them at my own home, and treated them as my own children; and you shall have them every one as soon as you bring in our People."


In the same letter Sevier later expressed his feelings of adoration for the Cherokee Nation. "I am now pleased with you of your Nation," Sevier wrote. "I love for you. I shall always... You may believe me, I speak from my heart." However, as a soldier of the frontier and later as governor of Tennessee, Sevier never hesitated to bring "fire and sword" to the Cherokee people whenever he believed his fellow frontiersmen were under threat of imminent danger. 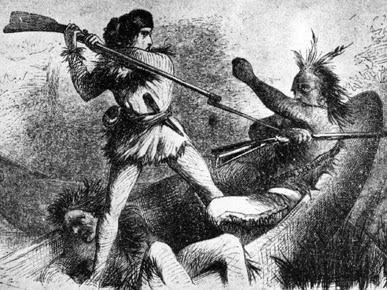 In the last engagement of his military career, through his own account, Sevier cemented his reputation as an Indian fighter and frontier hero in the town of Etowah located in the present-day city of Rome, Georgia at the Battle of Hightower. In September of 1793, General Sevier and his 800 men descended on Etowah from Tennessee, in retaliation for an earlier attack by Cherokees who had scalped and killed thirteen people at Cavett's Station near Knoxville. Sevier and his men caught up to the Cherokees and their chief, King Fisher, at present day Myrtle Hill and a battle ensued. Sevier's men emerged victorious after Chief King Fisher died in battle when a minie ball pierced his chest, and soon afterward the Cherokee warriors retreated. Sevier pursued them to Etowah where he ultimately defeated the remaining Cherokees.

In the only written account of this battle, in his official report to Tennessee's territorial governor, William Blount, on October 25, 1793, Sevier documented his troop movements through the mountains, rivers and valleys of the Hiwassee, Estanaula, and Coosa Rivers, his engagement with the Creek and Cherokee Indians, his destruction of villages and supplies, and his capture of Native American prisoners. On this last point, the General goes out of his way to suggest that he was benevolent toward his Native American adversaries:

"Many women and children might have been taken, but from motives of humanity I did not encourage it to be done, and several taken were suffered to make their escape. Your Excellency knows the disposition of many that were out on this expedition, and can readily account for this conduct."


Was John Sevier a benevolent adversary or brutal antagonist? The answer to that question remains unclear. In his diary entry of October 14, 1793, Sevier quotes the following order to his men:

"It is ordered that from this time forward no person presume to set fire on any Indian hut or town in which there is corn or provision without there are orders from me to do the same. No firing of guns in or out of camp except leave from me or a field officer be first obtained, and as the officers of every rank are sensible of the baneful consequences of such unwarrantable conduct, it is earnestly requested that they will use their utmost exertion to prevent the same."


Yet despite these orders, on October 20, 1793, Sevier warned the Cherokees with the following proclamation:

To the Cherokees and their Warriors, if they have any:

Your murders and savage barbarities have caused me to come into your country expecting you would fight like men, but you are like the bears and wolves.
The face of a white man makes you run fast into the woods and hide. I pity your women and children, for I am sure they must suffer and live like dogs, but you are the cause of it. You will make war and then are afraid to fight. Our people whipped you mightily two nights ago crossing the river and made your people run very fast.

As governor of the fledgling state of Tennessee, Sevier had to walk a more delicate line with his rhetoric, balancing his concern for the safety of his fellow citizens against the federal government's desire to limit their encroachments on Indian lands. In a letter dated July 20, 1796, Sevier wrote:

"I shall always be desirous of preserving and supporting peace between the frontiers and our Indian neighbors, by restraining, as much as possible, the former from intrusion and encroachments of every kind; at the same time hope the latter will be suffered to pass off with impunity, and any violences and depredations they may unprovokedly and wantonly commit. It is a well known fact and shamefully obvious, that all the erratic tribes are accustomed and habituated to licentiousness; and educated to a vagrant, lawless, debauched and immoral life, and nothing but a sufficient conviction of being chastised will ever deter those itinerant nations from their common desperate and rapacious practices.

It is to be lamented measures so harsh and cruel in the operation must inevitably be inflicted on any part of the human race; but in case of self preservation, and the enjoyment of tranquility, a nation is not only warranted to punish unjustifiable attacks; but may put the aggressors in such a condition as will prevent them in future from being guilty of like offenses."


Later in his political career, as a member of Congress, Sevier's rhetoric toward the Indians became more forceful and direct as the United States prepared for war. In the moments leading up to the War of 1812, Sevier joined seventy-eight of his congressional colleagues and voted for a formal declaration of war against Great Britain. In a letter to Tennessee governor Willie Blount, Sevier expressed his contempt for the British and their Creek Indian allies. "Fire and sword must be carried into that country before those wretches will be reduced to reason or become peaceable neighbors," Sevier raged. He continued, "There can be no reliance or trust placed in them. No doubt British emissaries are among them."


Several decades following his death, writers and antiquarians of the late-nineteenth and early-twentieth centuries attempted to place Sevier's Indian campaigns in a broader historical context, using the rhetoric of patriotism to cast Sevier in the role of savior of the Republic. Within the pages of history, scholars and storytellers amplified incidents of Indian depredations against white settlers with words laced with suspicion, fear and hatred. These chroniclers of early Tennessee history reenforced Sevier's justification of the use of force against the Cherokee population, no matter the costs. In their view, Native Americans existed as mere obstacles to Manifest Destiny.

Efforts to document Sevier's battles with the Native Americans began in earnest in the aftermath of the Civil War at a time when the nation sought healing through the stories of heroism of our past. For example, in his 1889 book, History of Tennessee, James Phelan wrote:

"If his mode of warfare was barbarous, he was waging war against barbarians, brave, cruel, relentless, and treacherous, without any of the things which civilization gave except its engines of destruction. Sevier was not the man to trifle with his task. Indian incursions could only be stopped by exterminating the Indians. Hence he tried to exterminate them. General Sheridan in the valley of Virginia was not more thorough. Every grain of corn was destroyed. Everything which could be used was burned, broken, or carried away. Every wigwam received the torch. Every boat was sunk. Nothing was spared except a few helpless human lives."


In another example, Oliver Temple Perry's biographical sketch, John Sevier: Citizen, Soldier, Legislator, Governor, Statesman -- written in 1893 and eventually published in 1910 specifically to honor Sevier following the re-internment of his remains in 1889 -- equated Sevier's "35 Battles and 35 Victories" with the battles fought by the patriots of the Revolutionary War. He wrote:


"The far-reaching importance of this Indian fighting has not been, and is not now, half appreciated. Few men ever think that when Sevier and Robertson, Boone and Logan were repelling Indian attacks, or invading the Indian country, they were doing anything more than protecting the white settlements. Whereas, in fact, they were unconsciously fighting the battles of the Revolution. The same great power which put in motion the armies of Clinton and Cornwallis, for the subjugation of the colonies along the Atlantic, and encircled them with a line of fire, also set in motion the fierce savage nations from Canada to Florida, bent on the destruction of all the infant settlements west of the Alleghenies and the Blue Ridge."