In 1788, as the State of Franklin crumbled around him, John Sevier found himself on the run -- a fugitive governor of a "stillborn state." After the United States Congress rejected Franklin's claim of independence, Sevier faced a charge of treason for refusing to yield to North Carolina's authority over its western counties. With an arrest warrant in hand, John Tipton relentlessly pursued Sevier until he surrendered, agreeing to "submit to the Laws of the State." North Carolina authorities then delivered a despondent Sevier in iron handcuffs to Morganton, North Carolina to await trial.

Various writers and storytellers have embellished the pages of history with sensational details about Sevier's capture, arrest and eventual release. The oft-repeated account of Sevier's dramatic "rescue" from a Morganton courthouse following his arrest was first conceived by John Haywood and later repeated by J.G.M. Ramsey in their nineteenth-century narratives.

In his Annals of Tennessee, Ramsey credits an unnamed "observant of all the actors" with supplying him with the details of Sevier's escape. In this version of events, two of Sevier's rescuers, James Cozby and Nathaniel Evans, mingled among the courthouse spectators, and as Cozby distracted the judge and his court, Evans secured Sevier's horse at a location near the courthouse window where he could make his escape. According to Ramsey's observant: 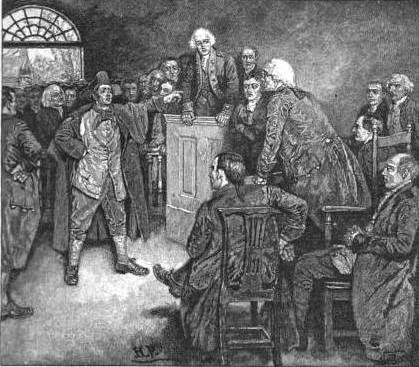 "Cozby entered the house, and there, arraigned at the bar, sat the object of their solicitude... Slowly he turned his head, and their eyes met; Sevier knew the rescue was at hand, but he was restrained from any outward demonstration, by a significant shake of Cozby's head; but it could not prevent the tear of gratitude, for he knew there were daring spirits near, that would peril their life's blood in his defense. During a pause in the trial, Cozby stepped forward in front of the Judge, and in that quick and energetic tone, so peculiar to him, asked the Judge if he was done with that man. The question, manner and tone, caused every person to start, to cast their eyes on the speaker, then on the Judge, all in amazement. In the meantime, Sevier had caught a glimpse of his favorite mare standing at the door; taking advantage of the confusion, he made one spring to the door; the next, he was safely in the saddle, and with the speed of thought, was borne from the wondering crowd. 'Yes,' cries a waggish voice, 'I'll be damned if you ain't done with him.' His comrades were not slow to follow in his wake, and, although immediate pursuit was made, a few minutes brought him to the main body, who, with one wild shout of victory, closed in the rear, and bore him on in triumph. That night they rested at the house of a friend, about twenty miles distant; from whence they made an easy journey to their homes, content that they had gained a bloodless victory." [Ramsey 428-429]

While this tale makes for compelling storytelling, the account is not entirely accurate. By most reliable historical accounts, a small party of Sevier's closest family, friends and supporters, including his brother Joseph and son John, set out to rescue Sevier from his captors following his arrest by John Tipton and his followers. They crossed the mountains into Morganton and, upon arrival, entered a tavern -- not a courthouse -- where much to their surprise, "they found Sevier in company with Major Joseph McDowell." McDowell and his brother Charles fought alongside Sevier in many campaigns during the Revolutionary War. Without hesitation, the two brothers posted bail for their good friend so Sevier could await trial as a free man. Sevier loitered in the tavern for about an hour or two before riding out of town toward the mountains.

The noted Tennessee jurist Samuel Cole Williams once attempted to correct this embellishment in a footnote to his History of the Lost State of Franklin. "While picturesque," Williams noted, Ramsey's tale "is not authentic," yet, the courthouse rescue story endures to this day in various newspaper articles and local color writers' accounts. Even Sevier's biographer, Carl Driver, mentioned the courthouse story, albeit with more brevity, simply stating, "While one of [the rescuers] questioned the judge, Sevier dashed from the building, mounted his horse, and rode away with his associates." There is little proof, however, that Sevier's "rescue" ever happened in such theatrical fashion.

This is just one example of how Sevier's legend grew through the retelling of these stories, and how he became in the hearts and minds of many "Tennessee's First Hero."

John Haywood. Civil and Political History of the State of Tennessee.

J.G.M. Ramsey. The Annals of Tennessee to the End of the Eighteenth Century.

Samuel Cole Williams. History of the Lost State of Franklin.