While John Sevier's exploits on the frontier, on the field of battle, and in the halls of government are legendary, the historical facts concerning his early years are a relative mystery. In his book, John Sevier: Pioneer of the Old Southwest, historian Carl Driver wrote only one solitary paragraph describing Sevier's childhood, briefly noting his date of birth, his siblings, and where he attended school, but little else. And in the preface of the 1910 book, Life of General John Sevier, Francis Marion Turner laments:

"When a boy reads the biography of a great man, he is especially interested in the hero's boyhood days -- his joys and sorrows, struggles and victories; and he is always disappointed if nothing has been said about that period of his life. The fact that the youthful period of Sevier's life had been neglected, led me to write this little volume. During my school days, when I read about the wonderful battles which General Sevier fought with the dusky warriors of the forest, and about the terrible clash with the British at King's Mountain, I wondered about his boyhood days. Later I was disappointed to find that the biography of an American hero, a man who had been instrumental in turning the tide of the Revolution at King's Mountain, had been sadly neglected. In all my investigations I could not find a book that furnished the information I was seeking."


Turner would go on to devote a generous portion of the first chapter of Life of General John Sevier to John Sevier's early years, remarking on young Sevier's fondness of living on the frontier, his hunting prowess, his education in Staunton, Virginia, and his work as a clerk in his father's mercantile store. Turner also commented on Sevier's encounters with the Native American population, stating, "A great many wild tales are told of Sevier's fights with the Indians in his youth; and, while we cannot rely upon them all as true, we do know that he grappled with the dusky fellows while yet in his teens."

This language -- "dusky warriors" and "dusky fellows" -- was written at a time when history was most concerned with the accomplishments of great men -- great white men -- and the narrative in almost every account of Sevier's life as an Indian fighter elevated the white settlers who he defended, and marginalized the Native American population. Most of John Sevier's biographers described Indians as "savages" constantly on the warpath, and wrote about Native Americans as if they were a singularly evil scourge on the untamed frontier.
﻿
The lines between truth and legend begin to blur as you read these accounts of John Sevier's childhood, leaving fertile ground for fiction writers and novelists to fill the void of scholarship. Among them was a man named William O. Steele.
﻿﻿
William O. Steele (1917-1979) was an award-winning author of historical fiction for children, particularly fiction set in the 18th century frontier of Tennessee. He was born in Franklin, Tennessee, and wrote most of his thirty-nine books in his home on Signal Mountain, Tennessee.

Steele's book, John Sevier: Pioneer Boy, was part of The Childhood of Famous Americans series, published from the 1940's through the 1960's. Each book in the series had a story about a boy or girl who grew up to be famous as an inventor, statesman, nurse, doctor, explorer, or some other worthy occupation. Many of these titles are out-of-print, but were reprinted by Patria Press as the Young Patriots series.

The series is currently published by Simon & Schuster, which claims it is "One of the most popular series ever published for young Americans, these classics have been praised alike by parents, teachers, and librarians. With these lively, inspiring, fictionalized biographies -- easily read by children of eight and up -- today's youngster is swept right into history."

Published in 1953, Steele's John Sevier: Pioneer Boy envisions young John Sevier as a brave adventurer, and his ambitions to conquer the frontier and become a leader of men are on full display. In the chapter, "John Is A Good Talker," John tells his brother Val: 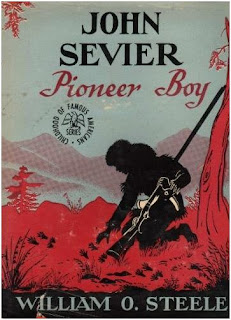 In this chapter, we also learn that John's father is considering leaving his merchant store on the frontier for Fredericksburg because too many supplies have been stolen in the night. Young John overhears this conversation and defiantly approaches his father, telling him:

"This is the first land you've ever owned, Father. You said so once. You've got to keep it. It's good rich land. When more people come here to the frontier, you could sell it for a big price... They come by your store all the time. Hunters. Men with their families. You said you see new people every day heading south through our valley. And frontiers need stores. Folks have got to have a place to trade. What will they do if you run off and leave them now?"

"John stood straight and looked very serious as he made his speech. Mr. Sevier pursed his lips to keep from smiling. Why, he thought, the lad looks and talks like a boy twelve or fourteen years old, instead of six and a half!"


William O. Steele's fictionalized account of John Sevier drew upon every frontier legend and exploit ever written about him. He used the stories of John Sevier's frontier adventures as an adult as literary inspiration, and painted a portrait of words which described the youthful Sevier as a brave and adventurous boy eager to claim his birthright as "Tennessee's First Hero." 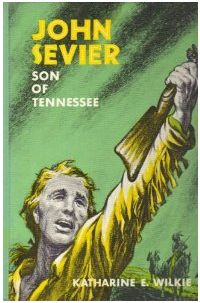 Other fictionalized accounts of John Sevier's youth also drew on legendary tales and embellished historical accounts. In the first chapter of Katharine Wilkie's book, John Sevier: Son of Tennessee, the author admiringly described John Sevier as a boy with an adventurous spirit. In one scene, Wilkie wrote lovingly of John Sevier through the eyes of his mother, Joanna, who daydreams of her son's greatness while gazing at her children at the dinner table:

"All their sons were strong and handsome, but there was something special about John, their first-born. She could not name it, but it was there. A joie de vivre that would not be denied. He always led his brothers and sisters, and yet they felt no jealousy. In every situation he was a few steps ahead of them. She pictured him, a grown man, as he would have been nearly two centuries ago at the court of Henry of Navarre, whom her husband's ancestors had served. No other nobleman could match blades with him."


In another scene, the Sevier family receives a warning of Indians on the warpath nearby, and soon father Valentine gathers his brood and tells them that they must temporarily abandon their home for the safety of the town of Fredericksburg. John Sevier is beside himself, exclaiming, "Father! We can't leave the tavern and the store unprotected... I don't want to run away. I'd like to stay right here, Indians or no Indians."

Despite his protests, Valentine Sevier ushers his family to Fredericksburg, where John Sevier quickly becomes bored with the drudgery of town life. The routine of school also bored him. "The wilderness is my world," John said stubbornly. "The bear and the elk - or the Indians - won't ask me if I can read Latin and Greek." 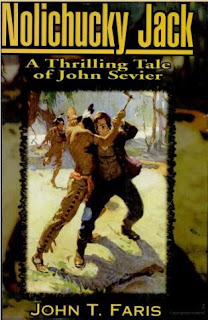 John Sevier's reputation as a daring adventurer inspired yet another fiction writer. In Nolichucky Jack: A Thrilling Tale of John Sevier -- originally published in 1927, and later republished by Overmountain Press in 1999 -- John T. Faris writes a fantastic tale in the first chapter, "A Pioneer Boy at School." After a warning of an imminent attack from Indians, the Sevier family takes refuge in a nearby fort. A nine-year-old John Sevier encounters one of the Indians trying to enter the fort, and instinctively reaches for a pile of sharpened stakes, stabbing the intruder in the head and killing him instantly. Young Sevier dragged the body into a cellar, where his father exclaimed, "Look at his head-dress! The boy has bagged a chief!"

In his introduction, while Faris states that "in all important particulars, the main incidents of Nolichucky Jack's life were as they are pictured in this volume," he also admits to taking "slight liberties" with some historical facts, including an encounter with a young surveyor named George Washington which was "made up entirely of extracts" of Washington's Diary. But Faris dismisses anyone who might doubt this story with an assertion that would never fly in any survey level course in history...

"It is possible that some extreme literalist will say that there is no proof that the young man Washington visited Staunton at the period indicated. Can they prove that he did not do so?"


Based on historical narrative, these fictionalized accounts of John Sevier's early life served to cement his reputation as an Indian fighter and a fearless leader of men, further embellishing and magnifying his image in popular literature as a frontier hero. Faris noted that "the Indians held [John Sevier] in wholesome dread, but the hardy frontiersmen loved him." John Sevier was loved so much that Faris proclaimed him to be "the greatest Indian fighter of pioneer days, hero of thirty-five victorious battles with the savages." This number was far short of the "hundred Indian battles" that the fictionalized John Sevier dreamed of having as a young boy. Nonetheless, his legend became known far and wide, beyond the pages of history. Many years after his death in 1815, a monument built upon his final resting place on the grounds of the old Knox County Courthouse declared John Sevier's fighting prowess over the Indian...

While tales of John Sevier's youthful frontier exploits were first penned on paper by antiquarians and admirers, and later embellished in the fictionalized accounts of Faris, Wilkie, and Steele, his Indian war cry was etched in stone for posterity. Few of Sevier's chroniclers, however, listened to the Indian's war cry, especially those writers of fiction.